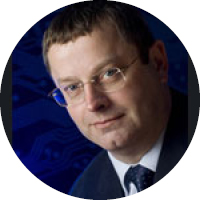 How did you first become interested in STEM as a career?
The first hint - on reflection - I had of becoming a bit of a techie was an early disappointment. I always wanted a Hammond Organ, told my parents of this, and was subsequently given an electric guitar with amplifier. This didn’t hit the spot at the time, however I found I enjoyed taking the amplifier to bits and producing a Tanoy-type gadget by adding a long lead and microphone. I still have the amplifier board, as it contains very early germanium transistors, the OC71 and OC81 in cream-filled glass encapsulation! It still works, of course. A bit later, Tonbridge School had an early connection to a CDC Computer in London, via an ASR33 Teletype and I was able to use this into the early hours - which I did. I was completely absorbed by it. I subsequently went on to do a degree in Computing and Cybernetics. In the holidays I operated the University of Kent’s main university computer, and did some electronics work for them part-time. At the end of my Degree I was standing in the car-park of the Computing Laboratory wondering what to do when Professor Brian Spratt, Head of the Department then, offered me my first job. Onwards and upwards from there. So I think the answer to the question is that Science and Technology interested me from the start.

What pathway did you follow to get to where you are?
After a Degree at the University of Kent I worked at its Computing Laboratory for a time. Then I went up to Cambridge where I worked at Acorn during the BBC Micro years and on the work in Advanced Research and Development on Acorn’s ARM-based machines. Then I worked at Olivetti Research Laboratory as Lab manager and a startup founded by Hermann Hauser called the Active Book Company. Collectively we designed and built a tablet-based computer - one of the very first - before even the Apple Newton. Then I moved to ARM and stayed 10 years helping with European Funded Projects and their University Program. Next I worked in sales at a Cambridge Company, XJTAG - which is still going strong now. I retired a few years ago and the family has now moved back to Kent. My children study at King’s Canterbury - where the Head of DT encourages students to use microcontrollers in their DT Projects. I help out with their coding technique and a bit of electronic design, where needed which is very rewarding.

What inspires and enthuses you about your work and STEM?
A little bit is finding out what’s actually going on in Schools. I’m trying to find Computer Science interest whenever I go to a STEM activity. Another part is helping out with some expert contribution. Lastly, I learn teaching techniques when I visit schools and I hope this helps me be more effective when I am at King’s.

"I think the answer to the question is that Science and Technology interested me from the start!"